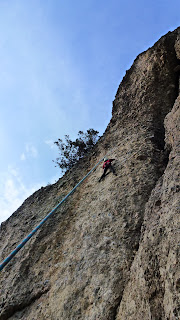 Another trip up to the Dingwall area to build on our fitness for Spain.

Andy N, John McK and co were making a first ascent of Andy's newly bolted line on the far left as we headed for the easier lines on the right to warm up.
It was a bit damp and gloomy in the trees so after a few routes we decided to climb one of the harder more compact routes in the sun that I'd spotted.
It was a good test for my homemade clip stick made with old alloy tent poles and shockcord. The route turned out to be 'The Seer' (7b) and a good exercise in aiding techniques using a clipstick!
Just as Fi was completing the final few moves to 'The Seer' lower off, Andy, John and co passed by on the descent path.
They were all heading home with a very surprised look on their faces - until I mentioned the clipstick ;-)﻿
Posted by Talisman Mountaineering | Cairngorm Guides at Monday, October 24, 2011