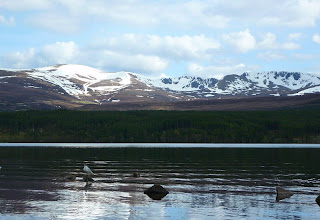 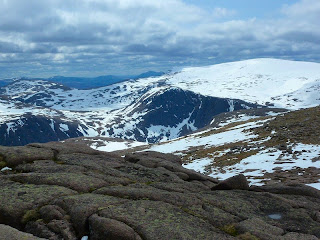 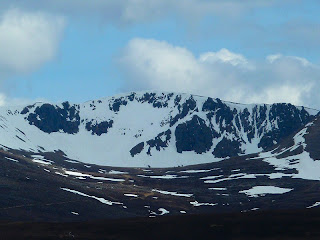 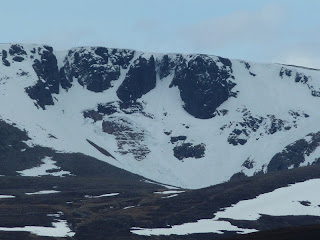 Surprisingly good skiing on the hill today. The ski area was again open for the weekend with pretty good skiing on the upper and middle runs considering it's almost June! As expected the snow got heavy and a bit sticky by the afternoon but the Coronation and the Cas walls still gave great descents on firm spring snow all the way back to the mid station. Several of the grade 1 gullies such as Aladdin's were reported to be in great skiing condition.
At this time of year it's possible to do an early morning snow climb and then once the snow has softened ski back down one of the gullies and climb a rock route...!
The main gullies are still full of deep snow although the climbing crags are black or patchy. Although some of the south facing granite cliffs are now clear of snow many of the approaches and exits aren't. Many south facing summer rock routes are running with melt water. The routes also have steep sagging snowy exits so are threatened by collapsing snow and rock from above!
There's still wide and complete cover from Cairngorm to Ben MacDui for ski touring.
I'll upload skiing video from today later this week.
Posted by Talisman Mountaineering | Cairngorm Guides at Sunday, May 16, 2010