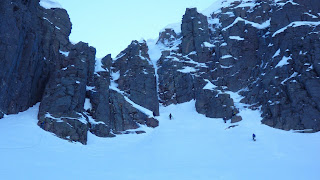 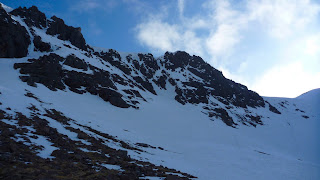 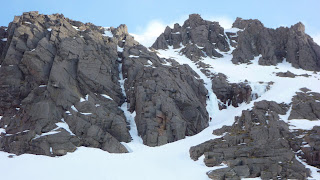 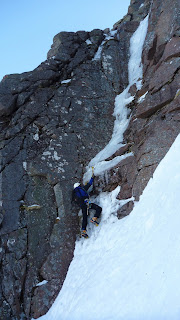 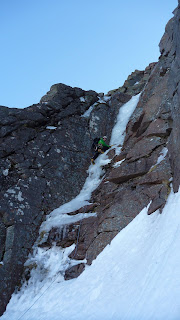 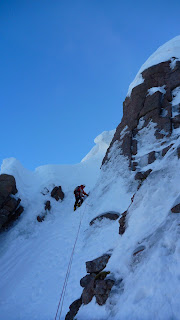 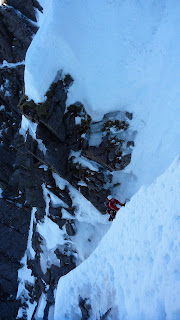 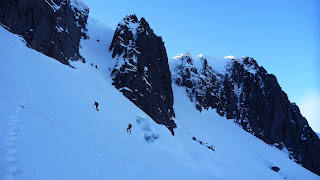 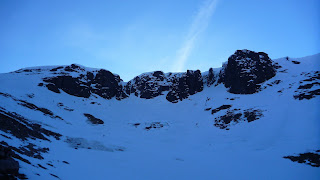 Another great weather snow and ice day this time in Coire an Lochain. We met Ian from Carrbridge again after meeting him on the Mirror Direct last week and had a nice chat on the walk in to the coire.
Our plan a was to climb Sidewinder which had been good early last week or Chute Route. However on entering Coire an Lochian we took one look at Sidewinder and changed our plans immediately as the buttress was now almost completely black.
On looking around we had a number of other icy options higher on No. 4 buttresses as well as the area around Y-Gully LH which had some big worrying cornices. The area above the Couloir was nice and icy too with Snow Bunting and the neighbouring routes looking good. Over to the left of the Corrie the Vent area and Milky Way were looking good so our plan b was to have a closer look at the narrow strip of ice on Chute Route!
It looked quite thin at the start though better higher up. Another team of two John's were starting up the route so we set up our belay opposite to get a good view and photos as we chatted to them and Al Halewood and Charlotte above on Milky Way.
It was then my turn and after feeling very chilled in just my VR smock the coldness quickly evaporated as I dealt with the technicalities of the thin start. Ten metres higher and a few good ice screw runners and the world was a better place as I then headed up on good ice to join Anne and her partner on the Milky Way belay on 50 metres of rope stretch. Another young lady and her partner later joined us on the cosy hanging stance! Fi climbed up and lead onto the plateau where I joined her for lunch in the welcome warmth of the sun. YouTube video at http://www.youtube.com/watch?v=rPxsm3QGio4
We headed back via the Goat-track chatting to Al and Charlotte finishing the Vent and their third climb of the day including Ewen Buttress (good nick)! On descent we met Smiler and his client who'd had a good day on Red Gully (bottom looked thin) and Fiacaill Couloir (still OK) In all a nice rest and very sociable day...!
More details and photos of me on Fi's blog here
Posted by Talisman Mountaineering | Cairngorm Guides at Sunday, March 06, 2011