Still early season conditions in the gullies however most mid grade and several of the hardest winter lines in the Cairngorms have been climbed this weekend...
Due to a Winter Skills course cancellation we ended up free for some climbing on Sunday! Fortunately unlike Saturday the weather was completely clear, bright and crisp - so lots of photos. Surprisingly with the ski area fully open there was still plenty of space left in the Coire Cas ski carpark when we arrived at 11.00 am! 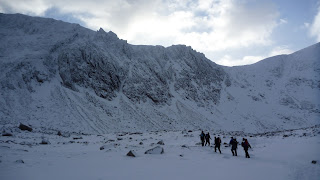 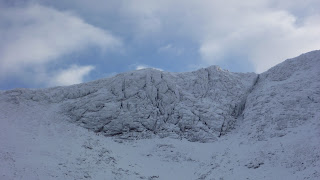 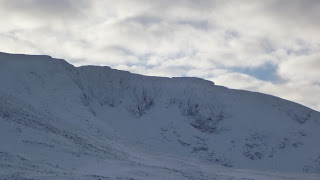 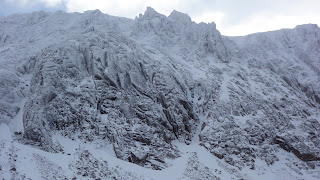 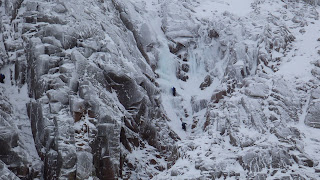 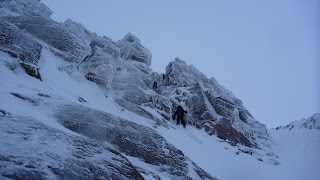 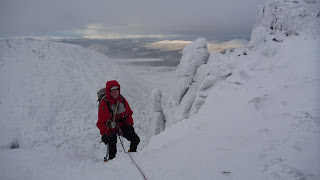 In Coire an t-Sneachda away from Fiacaill Buttress, most of the popular mid grade routes were being climbed. Despite this there was plenty of route choice and it was easy to avoid queueing or climbing below other parties.
Routes climbed in Sneachda, include Honey Pot, The Message, Haston Line, Hidden Chimney, Jacob's Ladder(thin), Aladdin's Couloir (thin), Doctors Choice, Patey's Route, Mirror Direct, Pygmy Ridge, All the Trident Gullies, Grooved Rib, Wave Length, Spiral Gully, Fluted Buttress Direct, Broken Gully, Fingers Ridge, Western Rib, Red and Goat Track Gullies to name but a few!
Further afield there were quite a few teams climbing in the slightly higher and steeper Coire an Lochain. Route climbed include, Central Crack Route Ewen Buttress, Hoarmaster, Aqualung, Auricle and no doubt quite a few others!
The BIG news is that the mighty 300 metre crags over in the Loch Avon basin, were also reported to be in excellent condition. The UK's biggest, hardest and boldest winter lines such as Citadel, Needle and Stone Temple Pilots were all climbed. Several of the Cold Climb classics such as Route Major, Sticil and Scorpian were also done!!
Details, photos and some inspirational and nail biting accounts can be seen on the respective blogs on the links above.
Finally on Henning's blog there's details of a new ice climbing venue and sunspot. The new route details and topos over at Glen Clova are here
It's always worth looking at Simon Richardson's blog on Scottishwinter.com for details of major Scottish ascents what's being climbed.
If I've missed anything please let me know and I'll add them in later!
Posted by Talisman Mountaineering | Cairngorm Guides at Monday, December 19, 2011