A great adventure in the heart of the Cairngorms 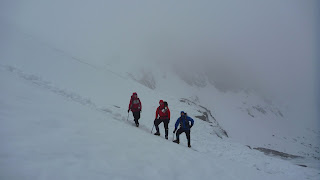 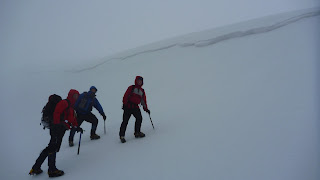 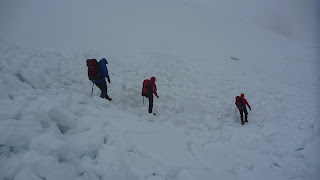 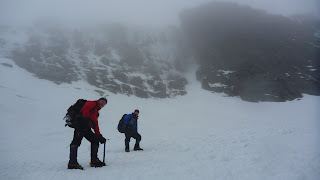 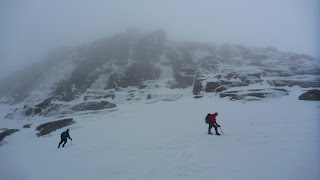 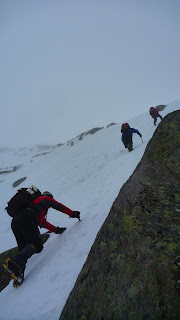 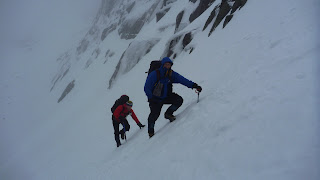 Following our night snowholing on the flanks of Ben MacDui, we decided to take a more scenic mountaineering route that avoided the strong gusty headwind on the plateau. We vacated our snow-holes and using map and compass, descended and traversed towards a misty Hell's Lum avoiding the small crags en-route.
Our adventurous mountaineering line gave plenty of crampon practise on tricky exposed icy ground while navigating, passing the large avalanched area mentioned in 'Avalanche Stories', on the SAIS blog from last week.
I'd seen the photos but on closer inspection the size and scale of the avalanche debris was impressive - a very lucky escape for the two climbers caught in the avalanche! We quickly passed below the crown wall and another area of cornice debris, before quickly traversing below an icy Hell's Lum. This was fortunately in the mist and not exposed to the sun!
The original plan was to climb up Coire Domhain then traverse over to the ski area and back to the car.
However we soon realised how sheltered our previous route was. We were caught by several violent gusts of wind that almost lifted us and lifted Fi, being the lightest, off her feet. Hanging onto our axes, we had to change our planned route as due to the wind strength, it was far too dangerous and impossible to climb further - see here!
Fortunately by taking a lower traverse line I'd  normally use on skis, we managed  to gain some shelter on the traverse over into Coire Raibert. The wind was nowhere near as strong in the coire. The exposed normal route from Pt 1141 down Fiacaill Ridge was far too risky so to be on the safe side we decided to descend via another ski route, down the side of  the Cas headwall / Coronation Wall.
Once in Coire Cas the wind was a fraction of that experienced in Coire Domhain. Back at the car everyone agreed it had been a great adventure and the adverse weather and poor vizibility really highlighted and consolidated our previous two days training. Tomorrow we'll look at emergency ropework, snow anchors and basic abseil techniques.
More photos and details on Fi's blog here togeter with the photos on our Facebook page.
Posted by Talisman Mountaineering | Cairngorm Guides at Tuesday, February 14, 2012